We just had the most sublime yakitori ever at a place we have no idea what the name is. When we were walking back to the hotel this afternoon, we spied a little place getting ready for the dinner rush. There were a couple of older gentlemen behind the counter and the display case was chock full of yakitori sticks. (Yakitori is various types of meats and vegetables on skewers that are grilled over a charcoal fire.) There wasn't a menu, but we had a good feeling about it. A few hours later we returned to check it out.

It was a set menu consisting of ten yakitori sticks, a salad, grated radish, and chicken soup. Almost all of the sticks were chicken – but we didn't even notice until almost the end of the meal! We sat at the counter, watching the guys work their magic. The guy who manned the grilling station was so focused on his job that absolutely nothing could distract him.
What was so amazing about this yakitori was how different each one tasted even though it was "just" grilled chicken. For instance, the wasabi chicken was ridiculously tender, just seared on the outside and raw on the inside. It just melted in your mouth. On the other hand, the chicken neck was deliciously chewy, a bit like squid or octopus. And ground chicken tastes totally different from chicken thigh! How often do you get to compare how all of these parts of the chicken compare to each other? We loved that this tiny little place focused on something so specific and had a set menu. They're so confident in what they do, you don't need a choice because it's going to be good and that you just need to trust them.
It's approximately three blocks south of Ginza-Itchome station exit 10. Go out the exit, continue walking straight for about 3 blocks, it's on the left. It has no menu, look for the old guys. 2200 yen set menu of 10 pieces.
Standard

OK people. The reason why we've been so quiet lately is that we've been going like mad and dithering over writing blog posts. So here's a quick overview of what we've been doing in Japan. (Yes, we will fill you in on Shanghai and Seoul in a bit, and more about specifics in Japan – like My. Favorite. Logo. Ever.)

Our itinerary for Japan was sort of a big black hole, even while we were in Seoul. Should we go to Kyoto first? Or Tokyo? Then we started reading and we were like, woh, there is so much to see here, how are we going to decide? Fortunately for us, we've been emailing Wayne's friend Nafumi for recommendations. Right after we booked our flight, she emailed us and said, I have a friend who could possibly put you up for a few nights, you should meet him! He lives near Kagoshima!
I scratched my head, I had no idea where Kagoshima was. It's a city on the island of Kyushu, the third largest and most southwestern of the main islands. It's a more tropical place, with the volcano of Sakurajima that looms large over the landscape. We said "yes please" and changed our tickets to land in Kagoshima, and Yoshi came and met us at the airport.
We were so glad that we changed our tickets – Yoshi was the most amazing host ever. He made fabulous dinners for us every night – from shabu shabu to sukiyaki to chicken sashimi (yes it was delicious). He took us to so many places, like Kirishima national park, where we went hiking; an outdoor contemporary art museum; and an onsen in Ibusuki that had the most breathtaking view of the bay. We were so grateful to experience Japan with someone who lives here, it's made such a difference to how we perceive it. And visiting a place that is off the beaten path has also been so rewarding – I don't think we would have gone to Kagoshima on our own this time around.
After a few days, we said goodbye to Yoshi and jumped on the train for Hiroshima. I love the trains here. They are so efficient and timely and they make sense! Even if I can't read Japanese, the system is logical enough to figure out when you look at the schedules. The train is clean and pleasant and FAST. The U.S. only wishes it had a system as nice as this.  And to top it off, the selection of food at the stations is so unbelievably good! Little lunchboxes filled with sushi or some kind of pork or rice balls or whatever. It's just so…civilized.
I also have to point out that every single meal that we've had here has been good. Even when we pick a totally random hole-in-the-wall that we have no idea what the food is going to be like, I end up cleaning my plate every time. We've stumbled upon or were brought to a ramen place that won #1 in the shio (salt broth) ramen category in its district, a conveyor belt sushi place that had ridiculously fresh sushi (and yes we tried horse sashimi), freshly made udon at another small joint in Hiroshima, okonomiyaki hot off the grill, some kind of fried chicken/fried chicken ball/fried ham combo plate (ok sounds gross but was delicious) at a place frequented by office workers…the list goes on. We've been devouring pastries every morning for breakfast because they're so good and relatively cheap. (Um yes that must be why I'm getting a belly. Sigh.)
We didn't have much time in Hiroshima so we focused on visiting the Peace Memorial Museum and the park around it, where the A-bomb dome is. Seeing the mangled dome with the walls around it that just disintegrate into rubble and visiting the museum hit me pretty hard emotionally. I tried to imagine the horror of that day but I really can't even comprehend what it must have been like. There were drawings from the survivors that were displayed in the museum that recounted their experiences and I felt a deep sadness that was also partly anger – how can we still build nuclear weapons when we already know the horrible consequences and suffering that happens? It just seems so foolish.
But I think the most hopeful thing is that Hiroshima today is not completely defined by the bomb. Yes, there are many memorials and the city strives to bring a message of peace to the world, but the city feels lively and bustling. A city that feels like it would be fun to live in – lots of great restaurants, excellent street life, easy to get around, good cultural institutions. Hiroshima feels like it's moved on to a bright shiny future.
After our short time in Hiroshima we caught an overnight train to Tokyo. We've been here for less than twelve hours, but we've managed to visit Tsukiji Fish market, wander around the smaller streets in Ginza, and see the Imperial Gardens. (and write this blog post!) So far, it seems like a city like New York. Rich and powerful. Enormous luxury cars zoom down the street, and crystalline skyscrapers glisten in the lovely spring light. I'm still trying to figure out what is Tokyo's character, what sets it apart from Shanghai and Seoul and Hong Kong. Give me another two days and I'll get back to you on that one. 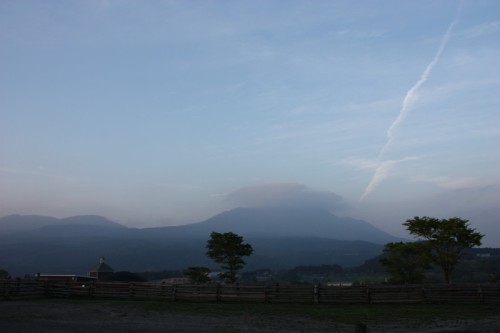 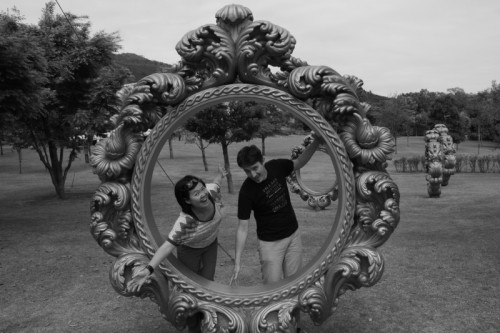